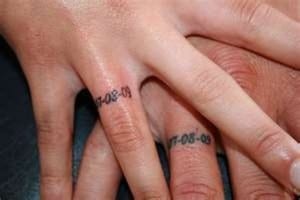 As each new season brings a fresh batch of newlyweds, we’ve seen a growing trend amongst these couples – the permanent wedding band. In addition to the traditional rings which symbolize the bride and grooms eternal love for one another, more a more young couples are tattooing a band around their ring fingers to permanently express the commitment they have made to one another.

Those individuals who decided seek out a tattoo parlor and hold hands as the artist places the ink into their ring  fingers have expressed how this step is the ultimate commitment. “Wedding bands are taken off at certain times in your life and even daily routine,” said Ashley, a new bride as of September 2012. “My husband works with his hands a lot so we can wear his gold band when he isn’t worried about damaging or losing it and when he can’t do that, he has the visible tattoo. Also, there was something sacred and intimate we shared when we had this done together the day after our ceremony.”

We’ve seen permanent makeup in the past but the tattooed wedding band is a new trend we are seeing for brides in 2013. What do you think – inked, traditional jewelry, or both?